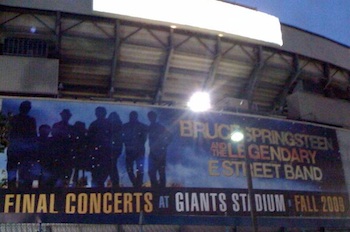 It’s been almost a year since that magical night at the Meadowlands and I still get chills thinking about it. It was the first night (Sept. 30, ’09) of Bruce’s last call at the old Giants stadium – a Born to Run night – and it was extraordinary in every possible way. I’ve seen the Boss before (though never on his home turf) and as expected, all 60 years of him, was in perfect form. But what made this night extra momentous, was his unexpected stop at our section. We weren’t up in the pit but further back in general admission and considering we didn’t bother to wait in line for armbands and instead chose to tailgate and leisurely stroll in, it was a better than decent spot. But we still had every reason to believe we would be lost in the crowd. Who would have guessed that it would go from, “Got a wife and kids in Baltimore, Jack…” to Bruce making his way down the aisle and landing right in front of us. LIKE RIGHT IN FRONT. The next thing I knew, my friend Tracey reached out and actually touched him. That’s how close he was and he didn’t keep on going. He stayed right there for however long it is when time stands still. It may not seem like that big of a deal, but at that moment, it was like a miracle to me and everyone else around us. It was electrifying and we all felt it. We went from a crowd of strangers to BFFs in an instant…hugging, high-five-ing and jumping up and down like we just won the lotto! And in that split second dream-like state, I could swear the guy in front of me snapped the perfect shot just as Bruce turned and looked back at us. It happened right before my very eyes, but in all the excitement, I never asked the guy about it and it haunts me to this day. I know… it was a year ago…but I just can’t seem to shake that image. If that photo truly exists the way it does in my mind, I have to see it. I’ve scrolled the thousands of photos on Bruce’s Facebook page to no avail…but I have learned there are all kinds of crazy Bruce tattoos out there.

The view from our spot.

There’s a lot of excitement surrounding the new Meadowlands. Bon Jovi already christened the space, Super Bowl 2014 is coming, football season is underway and sorry, Giants, I’m a Jets fan….only since rock star quarterback Mark Sanchez came to town…but a fan nonetheless. I just can’t move on until I take care of this unfinished business at the old staduim. If you were there that night “to help tear this old girl down” or know somebody who knows somebody, please spread the word. Tell a friend to tell a friend and so on and so on. Let’s test the reach of social networking and HELP ME FIND THIS PHOTO. I’m telling you, it’s a brilliant shot and finding it would be…insert Jersey accent here…frickin’ awesome!

So for old time’s sake, here’s the video of Bruce doing “Wrecking Ball,” the song he wrote especially for the occasion. It could never be as good as being there live, but still, raise up your glasses and bring it on…..GOOD EVENING NEW JERSEY!!!!

p.s. – Fire up the DVR for The Promise: The Darkness on the Edge of Town Story airing Oct 7 on HBO. Supremely frickin’ awesome!!

One thought on “CALLING ALL HUNGRY HEARTS!!!!”