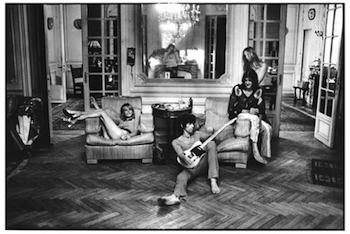 Cosmic American Music was the self applied label for Gram Parsons’ vision of his music – pulling on distinct styles of country, gospel, blues and rock.  The legacy he left behind is greater than the 6 records he made as an artist. I stumbled onto Gram Parsons when I was totally fascinated by anything and everything Keith Richards. Probably the single thing that moved me to listen and learn about Gram was a black and white picture of Gram and Keith, certainly in a substance enhanced state.  They were in a grand room at Nellcote, the villa Keith rented that became the nexus and de facto studio for the recording of Exile on Main Street.  It was Gram, Keith, Anita Pallenberg and Gretchen Burrell (who would later become his wife) draped over the furniture; Keith with his guitar.  The thought of that setting, a villa in the south of France, and that these people with little effort or regard could produce such a brilliant and perfect album drove me.  I wanted to hear everything he did and understand how someone so reckless could create such an enduring piece of music.

Gram’s childhood predictably provided the foundation for his restlessness as an artist.  He was born into a wealthy Southern family that unfolded like an upbringing on Peyton Place. Gram barely spent a semester at Harvard before leaving to start the International Submarine Band (ISB).    With a record deal in hand and a soon to be released single, he promptly moved onto the Byrds for the brilliant Sweetheart of the Rodeo, abruptly leaving again to start the Flying Burrito Brothers band. The latter transition from the Byrds was prompted by his star struck affinity for hanging out with Keith Richards during the recording of Exile…. and the decadence that imbued that setting.  His final incarnation as an artist resulted in two sublime solo albums, the last one being released posthumously. It was those two albums (GP and Grievous Angel) with Emmylou Harris that I connected to Gram Parsons and became a devotee.  It was the ache and honesty in the lyrics and the sound of his harmonies with Emmylou was sweet, tender and always heartfelt.  He revealed much of himself in his music, which was raw, and probably never fully crafted beyond the abilities that came to him so naturally.  It was the first country influenced music I ever listened to loud and the more I learned about Gram, the more I was open to it.  It made me run out and get Hank Williams.

It’s hard not to forget Gram’s death – just short of his 27th birthday from complications with drinking and morphine.  Fulfilling a drug and drink fueled pact  – his road manager and friend Phil Kaufman stole Gram’s body and casket from LAX (bound for his family) and attempted to cremate the remains at Joshua Tree National Park. The sum of his life and death adds up to a tragic figure that left this world long before he came close to reaching his full potential.