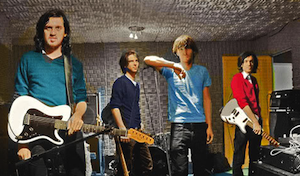 The band members (Mars, Brancowitz, his younger brother Chris Mazzalai on guitar and Deck D’Arcy on bass) met at the only record store in town, where they recognized each other as regulars. They became friends with the local boys in Daft Punk (“Thomas from Daft Punk sold us our first eight-track recorder”), though not Air (“They were three years older than us, so we didn’t know they existed until we moved to Paris”). As far as they knew, they were the only music scene in town. Says Mars, “We saw music as a very selfish thing. It wasn’t to get girls, because there weren’t any girls to get in that town, and it wasn’t to please people, because there weren’t any clubs or audiences to play for. So it was just for us.”