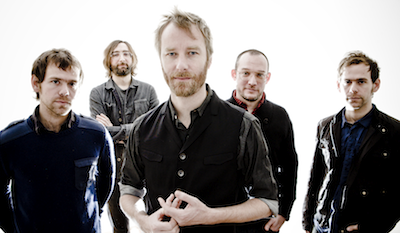 Not exactly sure where I’ve been but it wasn’t until I saw the recent NY Times article on The National that I actually came to. Sadly, I hadn’t heard of them before so this extensive spread really got my attention. Brooklyn guys recording in nearby Bridgeport? Who are these guys and what’s their deal? I immediately checked out their older stuff on the now defunct Lala and was blown away. Alligator was great and Boxer was even richer. I couldn’t wait to get my hands on High Violet and all I can say is I haven’t stopped listening to it since. I can’t. I’m hooked. As it often happens, once something hits your consciousness, it starts showing up everywhere. Suddenly, it’s like I’m being followed by The National. I surrender – I’m in. It started slowly – first a track on local radio (wfuv) – then a mention on The Daily Beast buzz board. Then I notice my other new love, Cory Chisel gives them a shout out on his Facebook page. (I guess great minds do think alike.) Finally, last week the  NY Times reported that High Violet was the #3 selling album of the week, coming in right behind Lady Antebellum and Justin Bieber. Pretty good for an indie band without any ties to American Idol. (That was the good news. The bad news was that it was one of the worst weeks for record sales….ever…but that’s a whole other story.) I can’t even explain what it is about them. Maybe it’s the deep baritone lead vocal. Or that it’s layered and edgy without going over the top. There’s something sort of haunting about it, but in a really attractive way. Which is why I was a little surprised not to see them on the new True Blood soundtrack. Come on, “Bloodbuzz Ohio?” It screams Bon Temps. But don’t get me wrong – it’s not all darkness and vampires. It’s really not at all. There are plenty of bright moments. Your best bet is to listen for yourself….I dare you.