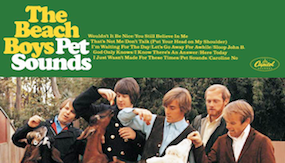 Beach Boys’ Pet Sounds is the crowning achievement of Brian Wilson and the Beach Boys. In an age where popular culture is so transitory, it is remarkable that Pet Sounds has not only stood the test of time, but has actually improved with age. Dismissed in 1966 for failing to capture the record-buying public, Pet Sounds is widely considered to be one of pop’s true masterpieces over the last 50 years.

By 1965, Brian Wilson led his group, the Beach Boys, to an unprecedented assault on the music charts, producing 12 albums and racking up more than 30 hit singles in just three years. Only 22 years old, he was responsible for composing, arranging and producing all of the material. Unfortunately, the work took its toll – Wilson suffured the first of many nervous breakdowns. As a result, he quit touring with his band and stayed home to concentrate on writing and arranging. Not content with the past success, he looked forward to producing more ambitious music. After hearing the Beatles’ 1965 album Rubber Soul, Wilson took it as a personal challenge, and set out “to make the greatest album in the history of rock & roll.”

Working with lyricist Tony Asher, Wilson’s new songs were more meaningful and complex. Considered by many to be the first concept album in rock, Pet Sounds is about a young man’s journey to adulthood. Themes of bliss, uncertainty, despair and hopefulness are wrapped in uncommon musical arrangements of harpischords, string chamber groups, banjos, bass harmonicas, woodwinds and other eclectic instruments. Brian’s lead vocals rose above the group’s trademark harmonies effortlessly, engaging the listener. What is not widely known, however, is that Brian sang many of the harmonies all himself, many times frustrated by his group’s inability to understand the complexity of his arrangements.

While the album spawned three hit singles (“Wouldn’t It Be Nice,” “Sloop John B” and “God Only Knows”), the rest of the material was perhaps even stronger. “You Still Believe In Me,” according to a classically trained musician, “compositionally embodies the unique manner in which Brian writes music. In a sense, Brian created a new way of using the scale. His progressions are always going up, then pausing before they go up again…like they’re going up towards God.”

Millions of music fans may not have welcomed Pet Sounds with either open arms or wallets, but the musical community was astounded by Brian’s aural achievement. Paul McCartney cites the album as a major influence on the Beatles’ Sgt. Pepper’s Lonely Hearts Club Band. It’s not possible to overstate how influential a record Pet Sounds was in its day, and remarkably, continues to be over 40 years later.